What a Sunday it was! Resting after JO81 square dxpedition, drinking cold beer, watching TV and popping in/out the shack to see if any Es around, found that SV's and South EU working Arcady 4X1GA.

Then Arcady reported S5 station has been decoded and some minutes after HA3GR as "worked".
Although HA3 is still "another world" in the terms of distance for Es decided to look for some moments on the screen.

Short check in the meantime - DX-maps did not show any significant clouds due Middle East from here, not even from Hungary.
And after few minutes 4X1GA popped on the screen with rising signal and QSO resulted. 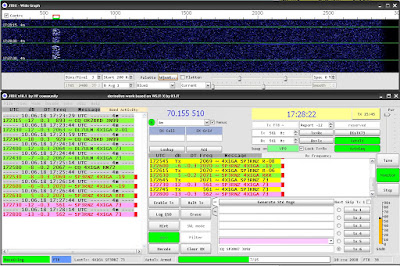 Next moments his signal peaked to CW level and Arcady qsy'ed 70.170MHz and worked DJ5MN with 549 signal here, and me with fast QSB at the end.

Email ThisBlogThis!Share to TwitterShare to FacebookShare to Pinterest
Labels: 70 MHz