Recently my friend Henrik OZ8ZS asked me to look into his "turbo" FT-847 because of intermittent power output on 70cm.

Websites are full with similar malfunctions in this "ol' good" rig caused
by deteriorate solder around PIN switching diodes in PA, both 2m and 70cm (see article by Peter OZ1PIF).
But there could be another cause - few OM's reported it before and some of them bring the radio back to full functionality after repair - see 2m module repair by OK2KKW guys http://www.ok2kkw.com/zzz/ft847_pa_failure.htm
This time 70cm module suffered from overheating, or (my personal thoughts ) mechanical and/or temperature stresses, after long period of use. Will back to this "probable" cause at the end.

Of course this issue can be repaired by replacing original module with Mitsubishi M67799M/A module -with no additional tuning needed.


If You are not skilled enough with ROHS soldering just don't do it.
These legs are very fragile and thin, module can be damaged easily.

Let's start - first we need to remove zillion of screws around PCB, 4 smaller screws around 2m & 70cm models also - do not use excessive force, they are glued - use good philips screwdriver instead. 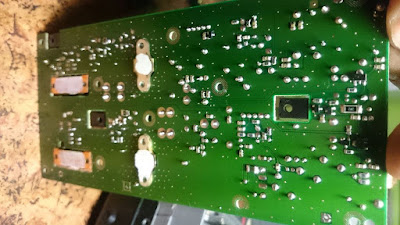 After removing the PCB it's obvious that Yaesu did not use much "very expensive" beryllium thermo paste under transistors at factory stage :-), nevertheless, we will remove old, dry fluid and apply fresh one later.

Just after desoldering first two legs the become loose, and popped somewhere. Actually they gone inside the module :-) input and output legs were still "soldered" in module. Let's see how Mitsubishi PF0340a looks inside... 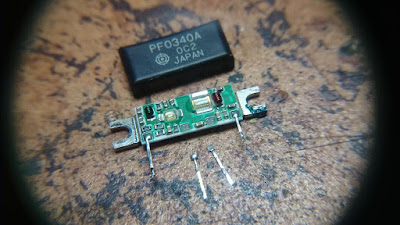 That's it - opening the case with small screwdriver revealed the mystery of intermittent power - two legs - power supply and bias were completely away, looking closer to their solder pads we can see completely damaged soldering points, they are grey and absolutely not OK.

Let's prepare to the module to repair job - find some bright place on your workbench, magnifying glasses and temperature controlled soldering station, good "Silver" ROHS solder will help the job much.
For the job prapared small piece of unused PCB and double sided tape to secure the module right in place, and avoid accidental move when soldering. 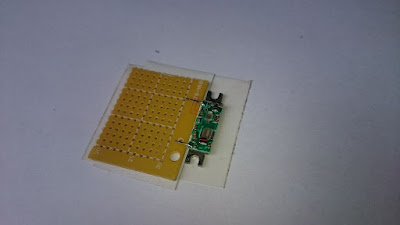 Now ceramic module pad and the legs are on same level as "help" PCB. 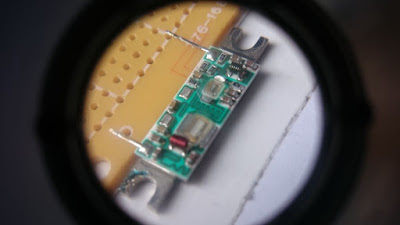 And voila! This is the module after soldering - all 4 of legs were soldered again, just in case. 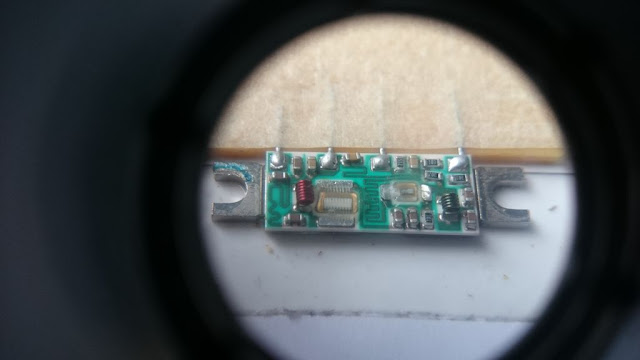 Now I will back for a moment to "mechanical stress" mentioned at the start...
Bearing in mind that only two of 4 legs were detached, why other two IN/OUT were still OK?
My idea is that beside solder issues like crystalizing after long period of use we have another possible cause - it's mechanical and thermal stress applied to both modules over the years of use.
This is not the point of this post, but I think temperature issues (heating/cooling curves) between ceramic pad, heat spreader and the chassis could have something common with it.

An idea came to my mind to prevent it in the future - adding VERY small amoount of plastic epoxy resin just between the legs and bottom of the pad : 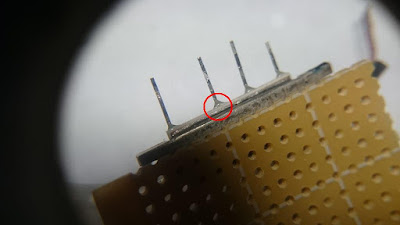 This will not harm the module, and possibly will prevent direct forces to soldering points at the ceramic pad. 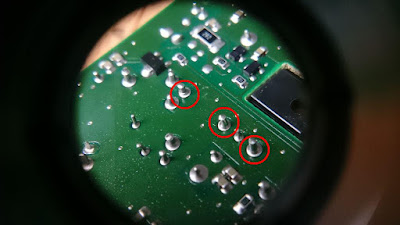 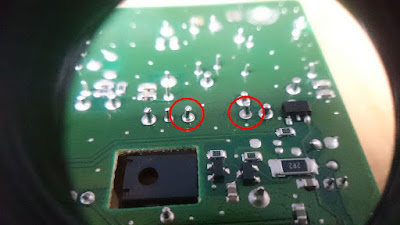 "(…) Last Summer, I did make a SUPER DX QSO on 6m band with JT65. So many people saw an incredible QSO.
It was not a short-range communication with a neighbor country but
a super-long distance communication across the continent. With SSB or CW, we do not have many opportunities. But with JT65, we could make a QSO even a few, very weak openings.Extreme multi-hop ES with JT65 , it was an amazing world.
However, there were two problems.
1.TX/RX sequence
When the strong station transmits in the receiving sequence, weak radiowaves arriving across the continent have been covered and not decodable.
So we, Japanese people did try an attempt to unify the transmission
sequence to the ODD number side.
Many Japanese agreed with the attempt, so we were able to get
a quiet receiving environment.
2.QRM from domestic QSO or short range international QSO with
neighbouring country
This is a BIG PROBLEM. These signals are very strong.
The station that cannot receive a DX signal start DOMESTIC QSO
on the same DF of SUPER DX station.... We witnessed such a tragic scene many times last summer. So we tried to separate frequencies between domestic communication and international communication (...)"
"So...I would like to try make a "CONSENSUS" in the world-wide user
community. I did try to contact with SMIRK, UKSMG, SixItalia, FaceBook Community-50 MHz-The Magic Band-DX.

And this "movement" started to move little by little - OE4VIE Jo,made icons (pic above) and started distributing.

As we all know soon we will experience flood of digital activity around 50.276 and 50.313 MHz.
Looking on HF bands JT65 is dying slowly, losing with FT8 mode which is obviously more productive
and better for fast QSB known well from 6m.
But on the other hand single frequency used for this mode will cause more QRM and overcrowded waterfall.
Is there chance to detect low, weak DX signal on brief opening among other EU stations on 50.313?
Doubt we will...
Adding the fact people still do not understand that FT8 is not low power but weak signal mode - soon we will see many unclear signals and ghost traces from EU.

How many DX we will miss?

This lead to conclusion tha we NEED to find some other frquencies to work long haul DX and to detects them. We don't have to bury them under EU signals.

Please read next post, a message from known Japanese digi fan Yoshiharu JP1LRT ... and spread among your SIX meters friend.

Welcome in 2018.
Better late than never, busy start of the Year totally deprived my free time for writing.
But some post were prepared - hope to fill this space with some usefull information soon.